Craig Calfee needed a bike frame after a spectacular head-on collision in Boston. Determined to make this frame as tough as possible, he built a bike using materials he had used at a job making composite rowing shells. He braided the tubes and laminated them together with tooling made on a drill press.

With a $10,000 loan, Craig hired a machinist to make the first production tooling. Professional bike couriers and amateur racers took to the streets of San Francisco to test the first frames. Adjustments were made and the frames were ready to sell to the public. Carbonframes became a corporation and debuted at the industry's biggest bike show, Interbike, in 1989. 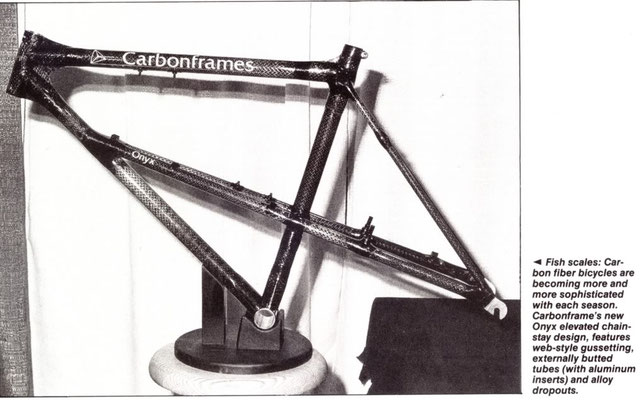 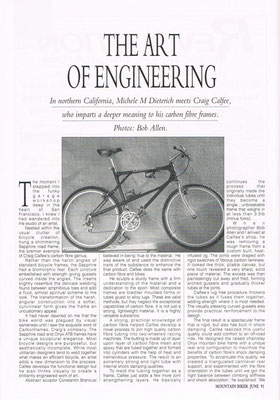 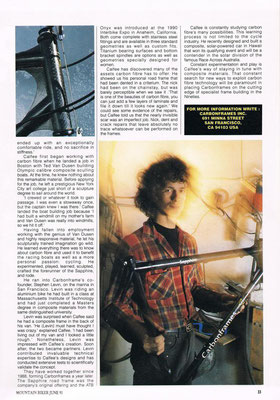 From its new headquarters in Santa Cruz, Carbonframes built a state-of-the-art production facility and continued production and sales of its superior frames. Professional triathlete Dave Scott rode his Carbonframe bike to second place at age 40 in the Hawaii Ironman World Championship triathlon.

The Luna Pro and the Luna Tri were introduced as affordable frames for a mainstream public who want lower prices yet high tech craftsmanship along with longevity.

In 1999, a customer sends an email saying: "Can you build me a carbon fiber Tandem?" After a year of testing and refinement, Calfee offers a tandem frame that is 2 pounds lighter than the next lightest tandem on the market. But the smooth ride quality is what gets the tandem community excited. It is the first production carbon tandem!

After a three year period of substantial growth, Calfee Design is ready to raise the bar in bicycle technology. The two pound Dragonfly frame debuts in 2000 but it takes over a year to finalize the production and begin shipping in late 2001. Although the economy slows, Calfee Design continues growing.

Beginning as a publicity stunt in 1995, Craig's bamboo errand bike evolves into a well-tested new model for the general public. 12 Bamboo bikes had been built for employees, relatives and friends. The feedback on the smooth ride quality was too good to ignore, so we decided to go into production

Back in 1984, when Craig was wandering around Africa, he noticed three things: 1. There was a lot of bamboo, 2. People used bikes and didn't have enough of them, and 3. they needed jobs. Perhaps people could build their own bamboo cargo bikes. So he put a small notice on the website to see if there was any interest in the idea. Various organizations and individuals encouraged and funded Craig to go try it out. Now there are bamboo bikes being made in Ghana with more places on the way.