Craig And Gary Cook are the brothers in Cook Bros. Racing and they made BMX and cruiser stuff in the late 1970's and early 1980's. Gary sold his share to Craig in the early 1980's and Craig later (1983?) sold the company to Jack Witmer. Apparently, there was a dispute between the parties, possibly over payment, and the non-compete clause was voided between Jack and Gary. Gary started up CQP with similar/identical designs shortly thereafter.

Gary Cook: As one-half of the infamous Cook Bros., Gary and his brother Craig produced some of the highest quality bike products during the 80s. Was one of, if not thee, first high quality precision part makers. Could be credited for lightening up BMX a bit His company introduced many firsts for BMX, such as built-in chain tensioners and a A-Headish clamp-on stem years ahead of its time. With the selling of Cook Bros., Gary has gone in and out of the BMX scene, with CQP (Cooks Quality Parts), maker of a 2-speed system for BMX. (from ababmx.com)

Craig Cook: The Golf Instruments Company has a long and distinct history in the design and manufacture of innovative sports equipment. With roots going back to early Southern California car, boat, and dragster racing, three generations of Cooks have designed, invented, and capitalized on Californias fanatical enthusiasm for sports. Craig Cook, Owner of Golf Instruments Co., first learned about materials and design from his perfectionist/inventor father, and after graduating from college with an Industrial Arts degree in 1972, began Cook Bros. Racing. The company pioneered. the sport of Bicycle Moto-Cross in Southern California with their Alpine Mountain Bike, which was one of the first mountain bikes in the world. (It is on display in the Mountain Bike Hall of Fame in Crested Butte, Colorado.) Other innovative Cook Bros. Products included sealed bearing BMX hubs and the 7075 billet aluminum crank arm. The company is still a holder of two United States Patents for component designs. Continuing the tradition, in 1987 Craig started a new company called C.D. Products producing a line of mountain bike frame sets. When golf became big business, Craig turned his interests in materials and design to golf equipment and started re-manufacturing a popular loft-lie gauge. Soon his new company, Golf Instruments Co. was producing a complete line of loft-lie gauges in three different styles. Their newest offering is a high-precision, high-tech shaft puller for delicate graphite composite golf club shafts. (from golfinstruments.com)

Slant Line stem from the 1978 catalog: 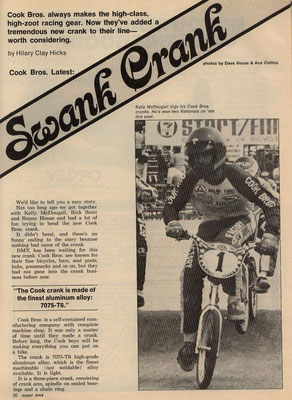 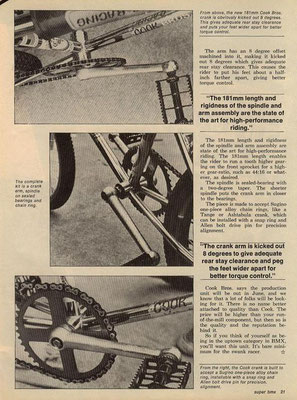 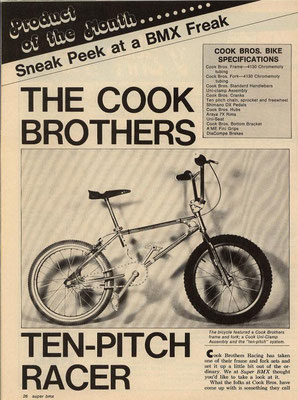 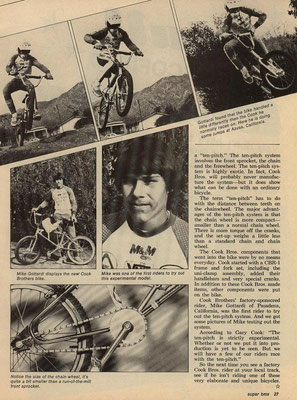 These scans are from the Jack Witmer era and I am guessing them to be from shortly after the buyout but they could be late 1983 or later): 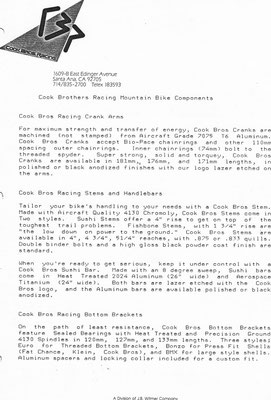 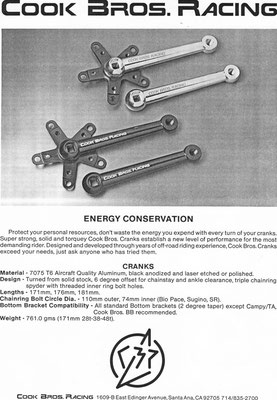 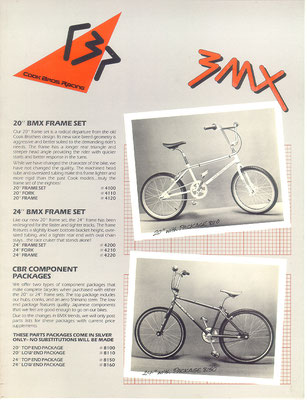 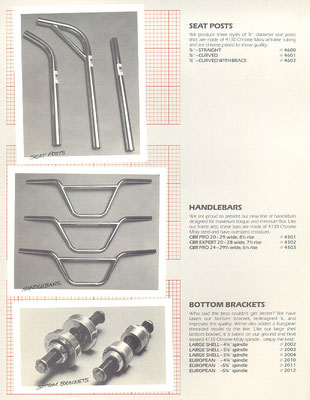 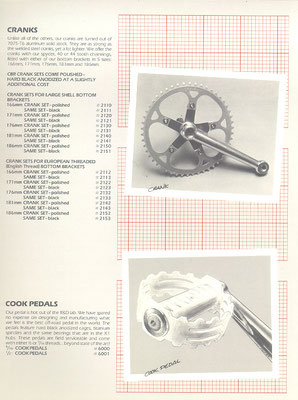 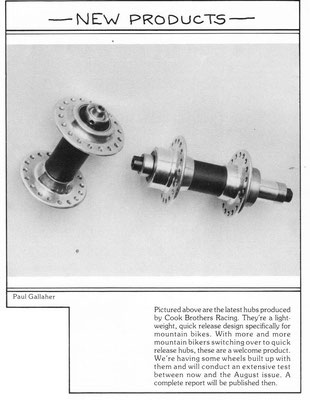 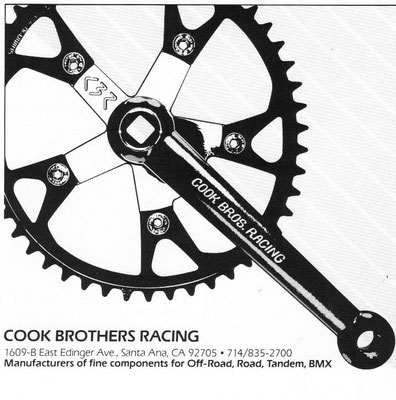 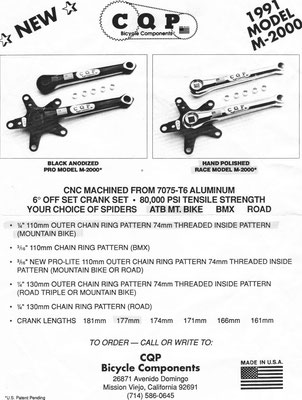 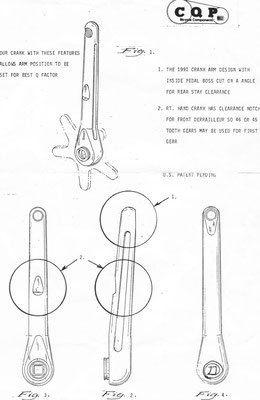 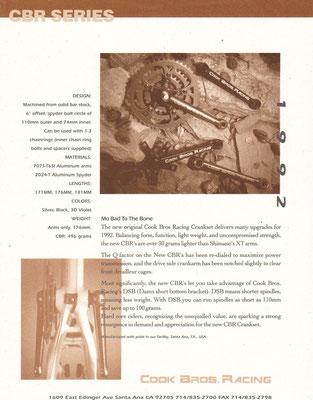 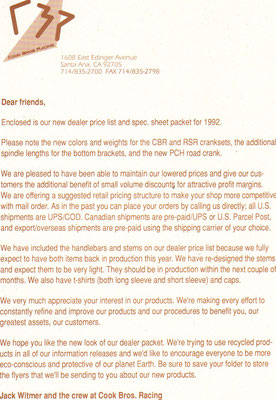 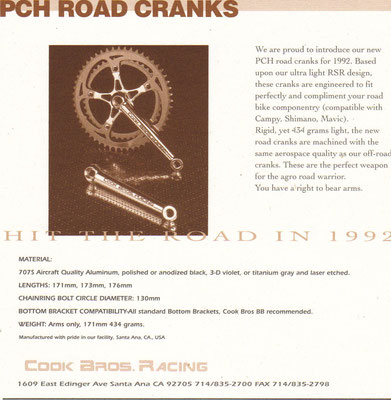 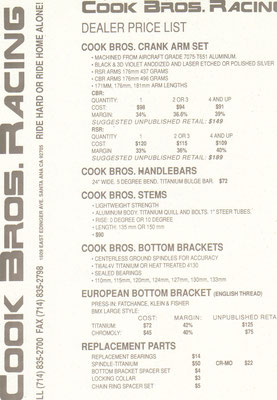 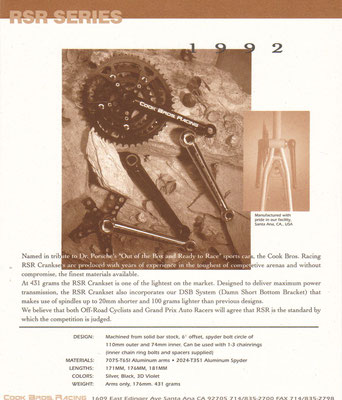 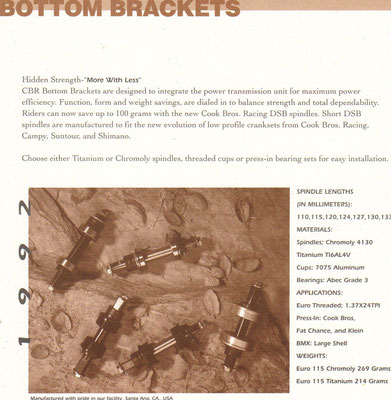 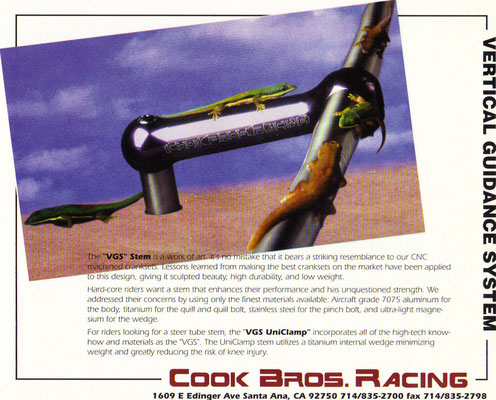 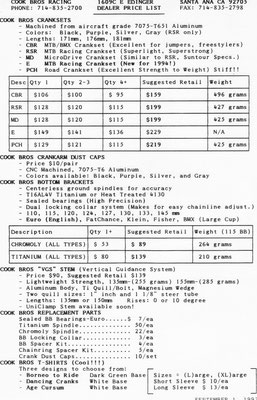 Undated catalog (I am guessing 1995 due to the Arroyo Grande address and availability of a compact crank): 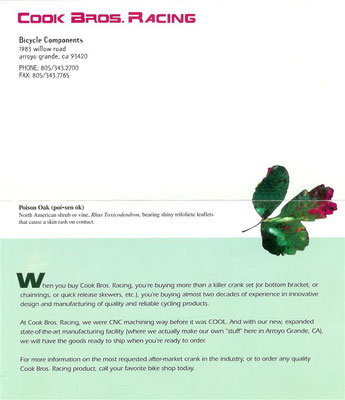 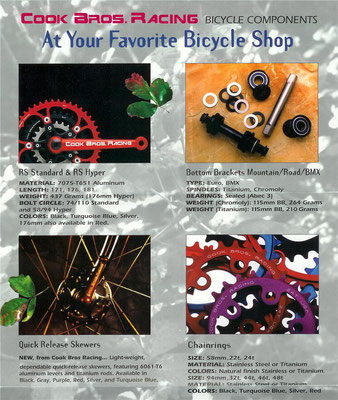 Another undated ad sheet (I am guessing 1996 due tot he Arroyo Grande address and the introduction of the E crank):