Retrotec was founded by Robert Seals, inventor of the original Cool Tool multi-function bike tool.  Always known for his outrageous antics, such as racing in a pink tutu, a standard bike wouldn't be appropriate.....enter the Retrotec frame.  The frame was based on the old Schwinn cantilever frame that were converted for "mountain bike" duty.  The frame used contemporary geometry combined with classic style.  Later a second frame style was added.

The "tube" bike was definitely not a "classic" style bikes.  The main frame consisted of a large tube, with big holes drilled in it, with fork blades for stays and a series of cables running from the seat tube to the drop outs and back to the bottom bracket.  The result was a pivot-less full suspension frame.  The idea was to have the fork blades flex but to be controlled by the cable system.  One of the tests was to run the bike over a 4" piece of square tubing and take pictures as the bike was ridden over the steel.  A conventional bike would often pinch flat the tire while the rear of the tube bike would flex enough to no flatten the tire.  In the photographs, the cables can be seen with slack in them which would correspond to the fork blades flexing.  There were skateboard truck bushings on the bottom bracket end of the cables and the bike could be tuned by switching to softer or firmer bushings.  The other advantage to the tube bike would be while turning.  Since the rear end would flex, the tire would tend to stay more upright while cornering which would allow the tire to have a larger contact patch and maintain better traction.  If you were behind the bike, the tire would tend to "stand up" straighter than on a conventional bike.  Other bikes, like Trimbles, would exhibit this as well.  Approximately 50 of the tube bikes were produced.

During the life of Retrotec, many prototypes were made as well as small runs of different models such as a 24" wheeled bike, titanium frames (10 made), road frames and even a handful of tandems.  If you are interested in a Retrotec frame, Curtis Inglis (who built frames for Robert Seals) is still making several models of the Retrotec frames. 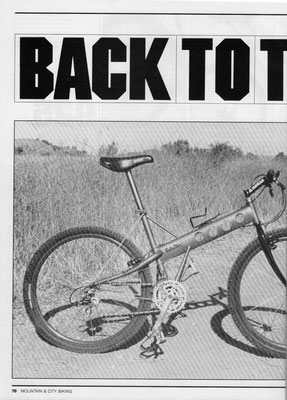 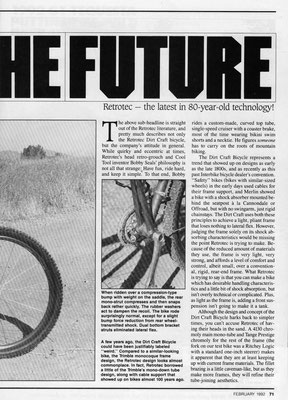 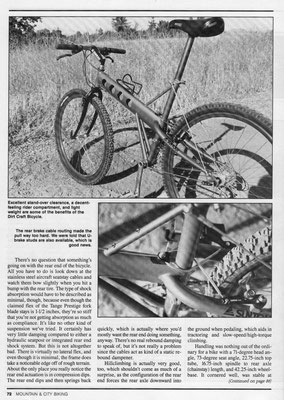 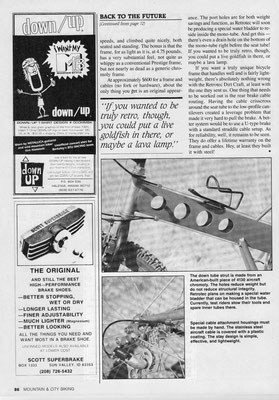