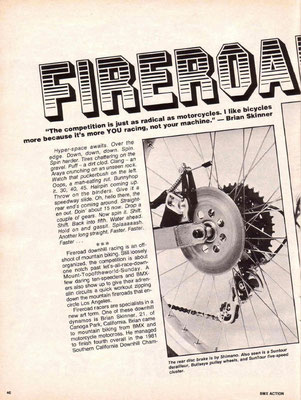 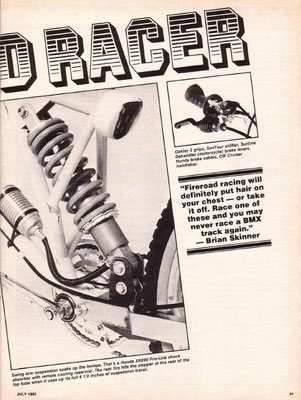 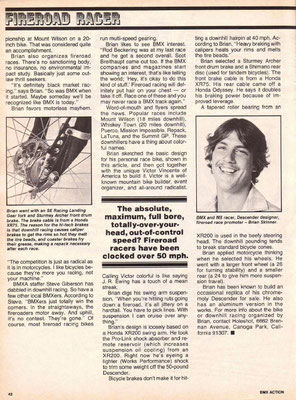 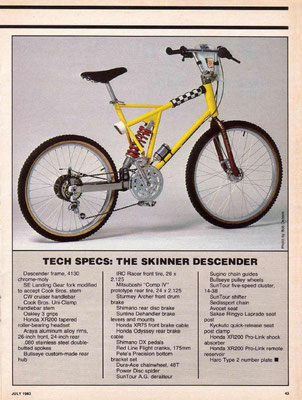 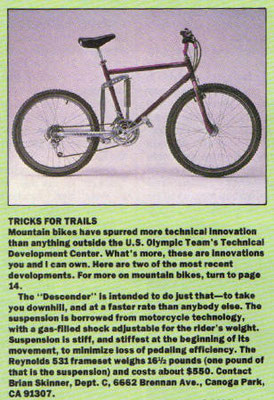 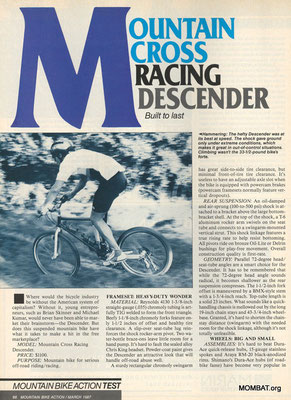 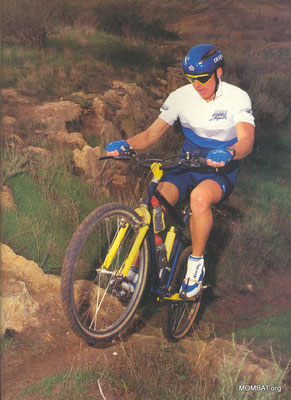 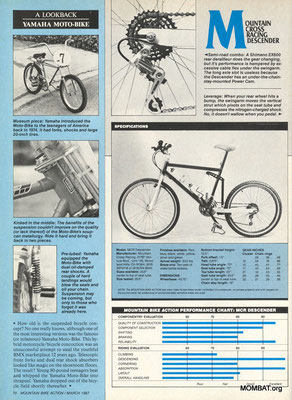 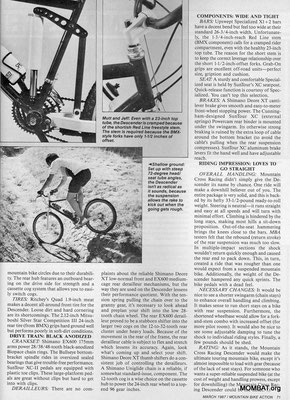 
MY STORY AND HISTORY OF THE MCR DESCENDER

How it all started:

Back in the 80s mountain bikes were just getting started, and I loved the whole idea. You seea lot of us  Southern California kids used to ride the trails from the top down on our BMX bikes. After we saw the first MTB; we all switched over to the balloon bikes so we could ride up the trails to ride downdown hilling was what most of us loved.

VVA (Victor Vincente of America), was the Guru of MTB in Southern California at the time, and not only built interesting mountain bikes, but he promoted MTB races in Southern California. Not long after entering one of his eventsand finding there was only a couple of events to race each year (this was about 1981-82 after the first SoCal event VVA put on called; Reseda to the Sea), I started MCR (Mountain Cross Racing) a company promoting down hill racing, and then cross country events since people asked for them.

At the end of 1982 heading into 1983; down-hilling was popular with 25 to 60 people showing up to race. Around that time, and being a disciple of VVA, he asked if I wanted to be sponsored for DH racing, and he would build a bike of my design to win races. Being a motocross guy, and feeling the difference between my MTB at speed and my motocross bike, I asked if he could build a frame with rear suspension. He looked at me oddly, but said he could, and we set to work making the first suspended MTB called the Descender (as seen in July 1983 BMX Action magazine "Fire-road Racer"). The name came after a brainstorming session with my friends. My buddy Mike Waldman came up with the name saying that the bike was meant for going downhill as in Descending, so I went with the Descender name.

Soon after the article "Fire-road Racer" appeared, I received many phone calls about buying one of these bikes so I decided to start making them in 1984. I had ideas on making it lighter and faster, but VVA did not have the capabilities to produce the bikes, and my good friend Steve Boehmke reminded me about Dan Hanebrink, and thats how Dan came into the picture.

Dan had some great ideas to make the bike lighter, more compact, and thats the bike design you see in the first 1984 Descender flyer from the mombatbicycles.com website. Later that year, I got sponsored by SE Racing, and they wanted to produce the bike, but Dan and I had sort of a falling out about the situation, so I struck out on my own with a new design back under MCR. Dan went on to produce that Descender design under SE Racing name brieflythen  for him self I believe.  So actually for a time there were two Descenders being produced?

The next and final incarnation of the Descender came a few months after Dan and I split. The new Descender was based off the 1984 Kawasaki KX250 suspension which worked well, and I loved how the KX 250 bike looked, so I copied the ratio, and dimensions from the KX and applied it to a bicycle frame. My father is a drafting wiz and drew up the blue print for me. A good friend of mine John Parker had just bought a bike company named Sweet Heart Cycles (soon to be renamed Yeti Cycles), and made the first prototype of the new Descender which later appeared in the 1984 issue of Mountain Bike Action.

Soon after that clipping appeared in MBA, I received a call from a company called Champion; they were a crane company that also made BMX bikes calledChampion! We met, and the owner Mike agreed to make the frame and forks for me. There were 75 frame-sets made in 1985. I also had to find a shock to fit the bike, and I was going to spec a spring shock, but realized I would need to stock multiple springs to fit riders. Gas shocks were a new concept back then, and Fox (a motocross company) was the only company making them, but were too costly.  Fortunately I found a small company called MotoSports that was going out of business, and bought all of their stock of gas shocksthis solved my suspension problems!

There was a time of turbulence for funding in 1985. First my girl friends father helped out, then another friend bought him out, and there were problems until Mike Kumar; a close friend of mine jumped in and saved the day at the beginning of 1986.

As a side note; I had been contracted by Shimano to do product testing and R&D development for MTB parts during this time (1983-85), so when Mike and I got things going; all Descenders came equipped with Shimano parts. 1986, and 87 were good years for the Descender, and we started to gain momentum on sales, advertising, and articles. The bike preformed well at races with Kye Sharp winning Big Bear XC and DH events, and myself making it into the Under 5 Club at Repack Down Hill, among other accomplishments. I even talked with a good friend of mine named John Tomac who was just getting started in MTB to race our bikes, but were under funded to get him to on the teamtoo badI bet we would have gone huge!

Sadly in 1987 I had to make a decision; Shimano wanted to make my position official, but I would have to give up the MCR business a conflict of interest they said, so I felt it best in the long run to do so, and sold out to my partner Mike. From there things faded away, and soon the Descender became history, but MTB parts became what they are today. I guess in the big picture of MTB it all worked out well!

To my knowledge and credit for being inducted into the Mountain Bike Hall of Fame; the first Descender (1982-83) is the first ever modern-day suspension MTB to be made. It had six inches of rear travel contrary to two inches that many people think was available in the early days of MTB.

At the 1984-85 trade show in Long Beach, Ca. the Descender made its first consumer appearance. As a funny fact; Charles Kelly saw the Descender and was excited to see it. He grabbed his then partner Tom Ritchey to show him the bike. After seeing the bike Tom said: I would rather put suspension on my legs than on a bicycle. I was devastated to hear that from one of the founders of mountain bikes back then, but my how times have changed!

There were three concepts in the design of the Descender. First; suspension was needed to go fast and to smooth the ride of bicycles in the dirt at speed. I would have designed front suspension as I felt bikes needed that too, but was way beyond my monetary scope to do that. Second; I felt rear suspension was more important. My thinking at the time was the pivot is center of the bike. While riding at speed your weight was center to the rear of the bike, so if the front wheel hit an object the suspension would absorb some of the impact. Third; I also felt wheel size would play a roll in suspension bikes, thus the 26in front and the 24in rear wheels. I felt the 26 front would help absorb bumps, and handle rough terrain while aiding in activating the suspension if the front wheel hit big bumps. The 24 rear wheel was a stiffer wheel by design, so it could handle the extra load from suspension, and lateral load. It also allowed me more room to make the linkage the way I wanted. There were trade offs in suspension design to consider, and the last rendering of the Descender was the most economic for me.

Of course there are many innuendos to the story and time line, but to explain it all would fill a book. The above words are the best I can offer in short order, and lays out some of the events and timeline in a fairly accurate order.