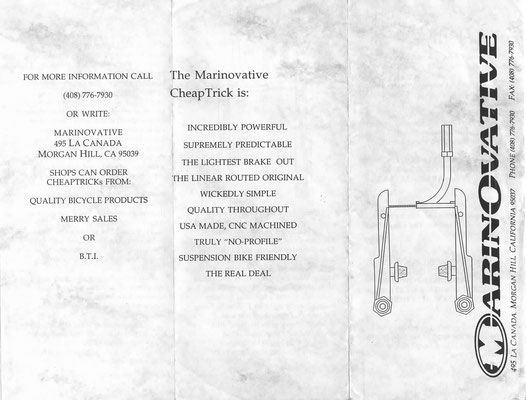 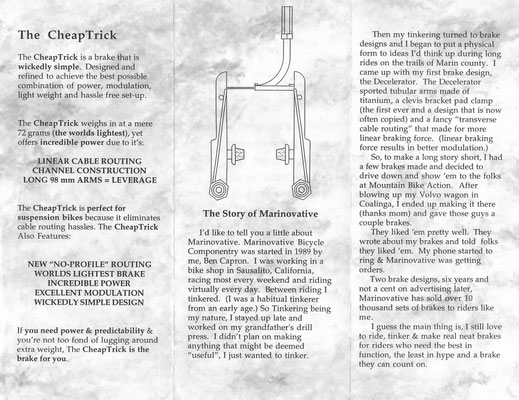 BY BEN DELANEY for the Interbike Dailies from October 2003

How old where you when first showed brakes at Interbike? It was September 1989, I was 18.

Which brake demo'ed on rolling display? The Decelerator.

Fifteen years ago an eighteen-year-old Ben Capron walked the halls of Interbike pushing the front end of a bike: fork, front wheel and brake. His one-man, plus backing from his sister, company Marinovative, produced three brake models, including a direct routed brake that sparked an industry revolution. Today, as Specialized's director of brand management, Capron is pushing more than a wheel at Interbike. And as one of the company's responsible parties for product development, Capron urges fellow Specialized employees to lay off the mental brakes and let the ideas rip. "I hope we keep taking fliers" said Capron. "When we've seen enough riders with certain desires or problems that lead us to believe we could help, we should undertake the task. We as a company  should reject complacency, and keep moving forward to enhance the cycling experience.  Some products will be gangbusters. Some won't. But if every one is a success we wouldn't be taking enough risks," Capron said.

For love or money. Capron was supposed to be a lawyer, like his dad. He took the LSTAT, completed the law school applications and scouted his options. Then Specialized offered him a job as a traveling tech rep.  While studying literature and legal studies at the University of California at Santa Cruz, Capron ran Marinovative out of his apartment and worked at The Bicycle Trip, a local shop. Specialized initially lined up Capron as a product tester, and was impressed enough to offer him a job traveling the country, educating retailers on product.   "My dad talked me out of law school. He said, "it's not everyone who can pay bills by pursuing their passions. And if it doesn't work out, law school will still be there." That was ten years ago, this November 2003," Capron said.

How did Marinovative come to be?

Capron: I had been working at The Village Peddler and Sausalito Cyclery, in Marin County, since the 1980's and was always into tinkering. I lost my drivers license due to an accident when I was16, which forced me to ride my bike exclusively for transportation. That's when I just went head-over-heals for bikes.  I had this concept that I hack-sawed out of aluminum and used my grandfather's drill press, that I had in my bedroom closet, to cobble together this brake. My sister said, "why don't you see what you can do, make this into a business." That hadn't even occurred to me. I contacted Mark, at Paragon Machine Works, who gave me a ton of help.  He helped me modify my design so it was more manufacturable and then made the first several production runs of brakes.  Mark is a founding member of SOPWAMTOS (Society of People Who Actually Make Their Own Shit). I was never bashful about calling around. I called machine shops, titanium and aluminum suppliers and they sent me samples that went into the first production runs.

What products did Marinovative make?

Capron: The first brake was the Decelerator. They had vertical parallel arms with rollers on top that the cable looped around. The first ones weren't much to look at. I used old Deore cantilevers with the outside portions

chopped off and two Blackburn rack mountings bolted on. People thought I was a total wing nut. Then the next brake, the first direct routing brake, was the Stop Lite. It and the Decelerator were made with titanium tubes. Then I did one in aluminum, the Cheap Trick. That one sold the most. The company started with a first batch of 10 (Decelerators). I drove down to SoCal, blowing up my Volvo's engine in the process, to visit Mountain Bike Action.  Jody Weisel and Zap rode around on my bike to check out the brakes. First they wrote a little clip. Then the next issues had a full page review. From that point on my phone was ringing off the hook. I did run of 100, then 200.  Eventually, with the Cheap Trick, It got to the point I was doing up to 500 a month.

Do bike magazines still have the power to make or break companies?

Capron: Everything is in flux. The change we've seen, particularly in mountain bikes, is a relatively textbook maturation process. It's natural that when something in its adolescence, people are more likely to rely on

someone else's opinion than their own. At same time, the types of bikes and the way sport of cycling has fragmented makes it relatively confusing. The relationship between manufacturers and media has changed. Now, it's really important for brands like Specialized to have help in communicating the differences in categories. Riders are more secure in their own opinion now, but may be confused in regards to all the types of bikes and equipment, and which one is right for them. It is no longer useful for magazines to say simply 'this is a good or bad bike.' It  must say 'this is a bike for this type of riding, and these attributes are important in this category for these reasons, then evaluate those attributes against the backdrop of the intended experience. Nothing bums us out more about a review than when it doesn't say what the bike is for and evaluate it in that context.

The lateral-pull brake is now ubiquitous. Why didn't you patent your designs?

Capron: On the Decelerator I pursued a patent with my sister's dough. I worked with a lawyer that wasn¹t exactly forthcoming. I had the drawing and the patent application and I paid him the fee we agreed on. Then he said, 'we're halfway there.' Turns out a patent's validity must be defended before it is accepted. I didn't know that, and I didn't have any more money. So the second time around, with my first direct routed design - the concept that is now so common, I was sour on the patent process. There are new ways of combining old ideas, but I don't think there are too many new ideas. Getting too hung up on that can get in the way of the original motivation of enjoying riding and trying to expand and enhance that experience. Sure, you could say that if I had a patent on the direct routed design, as popularized by the Shimano V-Brake,  I'd be a millionaire.  But with a patent, maybe other companies would not have pursued the direct routed concept. The way it's turned out, millions of people have had the experience of better braking, which I hoped makes their ride better.

Have you designed anything else?

Capron: The Dirt Worm (laughing). It was a non-circular inner tube, sealed at the ends, that you could install without taking the wheel off.