Long before Litespeed was a bicycle company, it was functioning as a high end custom machine shop specializing in exotic metals. What was then called Southeast Machine created anything from items as simple as nuts and bolts for local companies to items as exotic as underground tanks for liquid gun powder for government agencies, and pretty much anything in between. Southeast Machine was a family run business, and in addition to mom and dad, 3 sons and a daughter were also part of the company. The elder sons were fairly active runners. When the oldest son suffered a running injury, he was told that he needed to ride bikes instead. As that son went to a local bike shop he found himself not too impressed with the selection and thought that he might be able to build a bike from the titanium material they had in the shop.

After playing around in the evenings and on a couple weekends the brothers had created a frame and eventually took it to a local bike shop to get a fork for it. The guys at the local bike shop kind of mocked them a bit about their attempt to build bikes themselves, but that did not deter them. Eventually word of mouth got out and several regional athletes asked about the bikes and slowly the weekends at Southeast Machine were busy with crafting bike frames. News by now had traveled across the country and several high profile athletes were inquiring about the bikes.

In 1986 the family was encouraged to show off a couple of their creations at the Long Beach, CA bike show and eventually they traveled with a few frames on their back to California. While they were at the show, someone made them aware that another company was also exhibiting titanium bikes, but at the opposite end of the hall. That company was called Kestrel, but eventually ended up being called Merlin as the name Kestrel had been already been taken by another company.

The response at the Long Beach show was phenomenal for the family and it was now time to name the bike company. "It is light and it is fast, how about Litespeed?" was one of the suggestions that really stuck, but eventually it was decided to spell it Litespeed.

Litespeed quickly got a great reputation as a very experienced titanium manufacturer, and before too long Litespeed was creating frames for many notable brands within the bike industry, including but not limited to: DeRosa, Merckx, Tommassini, Basso, Univega, Alpinestars, Marin and Rocky Mountain. This work actually helped Litespeed in more than one way as basically some of the greatest minds in cycling were sharing their bike design philosophies with Litespeed and all the folks at Litespeed soaked up all that information like sponges. Before too long, bicycle frames and components were the main business of Litespeed and outsource work was less and less accepted. 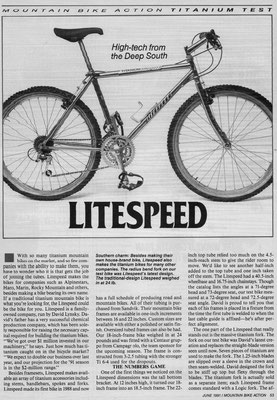 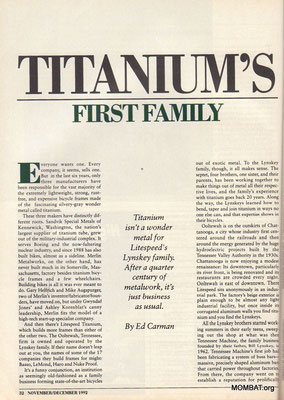 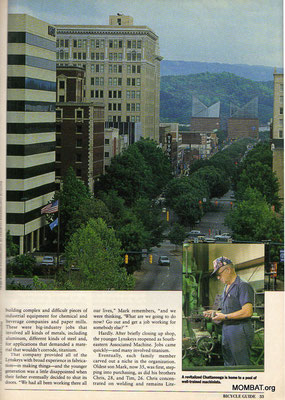 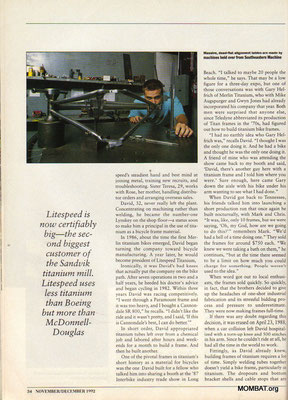 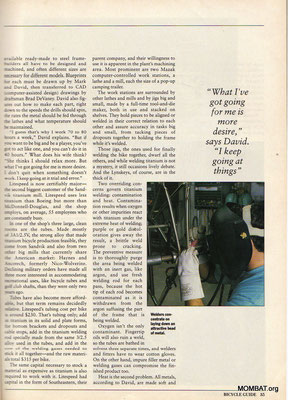 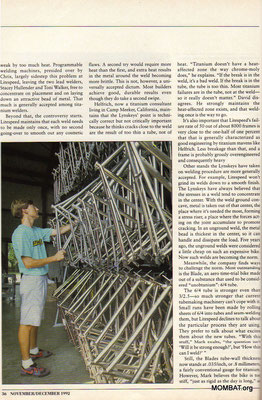 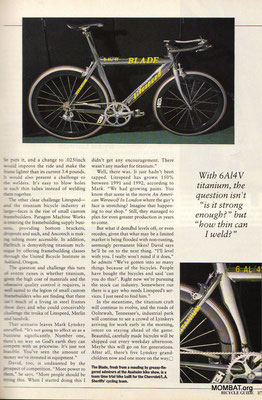 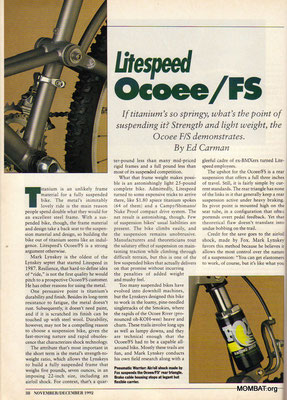 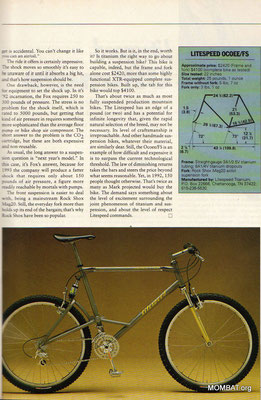 The Ocoee F/S uses a 6AL-4V alloyed titanium in the two inch diameter, multi-shaped down tube and bottom bracket shell. The rear suspension design, VariLink Suspension Technology, uses a Fox Alps IV rear shock for a claimed 3" of travel.  The design is the fairly common long link type with the link attached to the seat tube which activates the shock which is mounted to the bottom bracket area.  There is a pivot at the seat stay/drop out juncture.  Available in five sizes from 15" (4.65 pounds) to 21" (4.90 pounds) and can be speced with a Rock Shox Mag 21 SL Ti "LT" (2.3" travel) or Rock Shox Quadra (1.7" travel).  The Obed F/S uses the same technology as the Ocoee but substitutes a 3AL-2.5V down tube and is stock with a Litespeed elastomer shock for 2"+ of travel or it can be optioned with the Fox shock.  Fork options are the same.  The sizes are limited to three, from 16.5 (4.8 pounds) to 20.5" (5.2 pounds).

Litespeed likes to take native names from there region.  Ocoee is the Cherokee name for an area in the Appalachian Mountains with some treacherous single track trails.  The Obed models are named after Tennessee's Obed River.

Several parts are available to round out your Litespeed bike.  300mm, 198 g Titanium seat posts are available in 26.8, 27.0 and 27.2 sizes.  Titanium is also found in the bottom bracket spindles that ride on sealed cartridge bearings inside aluminum cups.  Three degree bend handlebars are also optional and come in at 170g.  Both quill and Ahead off-road stems come in a 5 degree rise and lengths of 120, 130, 140 and 150mm.

The Obed F/S changed to a much simpler aluminum Amp rear suspension mated to a titanium Litespeed front triangle.

The titanium seat posts gets a simpler aluminum head design and goes up to 215 grams while the stem offerings remain the same.  The bottom bracket still uses a Ti spindle but switched to a more Shimano-like sealed bearing system (solid cover between the right and left bearings).

Forks are available to match to the frames and your options include: Rock Shox Mag 21, Judy XC, Judy SL and Manitou 4.  Two parts packages are also available so you can order a full bike at one time.  Two mountain groups are offered: an XTR kit with Grip Shift 800 and Litespeed post and stem or an LX/XT mix with Control Tech accessories.

1996 just finds a few minor tweaks on a couple of models.  The Ocoee has new tapered/ovalized asymmetric chain stays for better crank and tire clearance.  All bikes go to a "stronger" graphics package and the Ocoee F/S gets a yellow painted rocker link and the Obed F/S goes to a yellow Amp swing arm assembly.

A new model is added on the entry level side, the Hiwassee, named after the Hiwassee River which ranges from Nantahala, NC to the rolling hills of east Tennessee. It appears from the catalog that this model will only be available as a complete bike with a LX/STX parts mix, Quadra 21 and a yellow powder coat finish.

The component and fork options carry over as do the seat post, stem (minus the quill stem?), handle bars and bottom bracket (once again with another bearing design)

The new rear suspension design now features adjustable travel from 4" to 6" (MTS: Multiple Travel System).  The new design is a single pivot design with titanium asymmetric S-bend stays and Z-bend "seat stays".  A Stratos air shock features a bar-mounted lever for lock out.  The MTS system is used on two models, the Machete and Owl Hollow.  The Machete uses a 6Al/4V bladed top tube, wedge shaped head tube and is marketed as an aerodynamic down hill model.  The Owl Hollow uses the more conventional round 3/2.5 tube set.  The shock mounts to a mid tube on the frame.

On the hard tail side, the Tellico (6/4), Ocoee (3/2.5 butted and tapered), Obed (3/2.5) and Hiwassee (complete bike, now in natural Ti) are joined by the new Owl Hollow.  The Owl Hollow is named after an area north of the Litespeed headquarters and features a bi-axially ovalized 6/4 down tube.  All models are now suspension corrected to a 2"+ travel fork.

Titanium 160g bars, titanium bottom brackets and titanium Ahead stems are joined by the seat post that now features an American Classic head on a titanium shaft.

The Hiwassee becomes the entry level full suspension bike for 1998 with an Amp-type strut rear suspension (aluminum) mated to a 3/2.5 front triangle.  The Unicoi is a new model and has a pivot-less design that provides up to 1" of rear travel via a small coil spring mounted in the seat stay wishbone.  The Cohutta is also a new design with a four-bar link (4.5" travel) and adjustable seat tube angle (via a movable seat mast attachment system.   This is marketed as a dual purpose (cross country or down hill) bike and is listed as being triple-crown fork compatible.  The Owl Hollow, with MTS, continues but switches the shock mount from a mid tube (now eliminated) to the down tube.  All full suspension bikes feature red swing arms and new graphics with bold blue model names.

The bottom bracket is no longer listed but the seat post, bars and stem continue on.  The post still appears to use the American Classic head design.

1999 sees the end of the true full suspension bikes which are replace by soft tail designs.  Titanium is much harder to manipulate and is prey flexy in the smaller tubing diameters which makes full suspension designs tough to do.  The price of aluminum full suspension bikes continues to fall which makes the titanium bikes seem even more expensive.  It is also expensive to machine the small suspension bits and mounts out of titanium.  The pivot-less soft-tail design makes takes better advantage of the properties of Ti.  Titanium flexes nicely and has an almost infinite fatigue life which are perfect in the soft-tail world.  The Unicoi continues from 1998 and is joined by the Tsali which adds a 2" bi-axially ovalized down tube.  The sliding stanchion is also titanium nitride coated on the Tsali.

The hardtail line still consists of the Tellico, Owl Hollow, Ocoee and Obed.

Each model now has its own font for the model name.

The titanium bar, Ahead stem and seat post are joined by a new aluminum handlebar (155g, 5g lighter than the Ti)

The new Tanasi (Cherokee word for which Tennessee was named) is the top hard tail.  The main frame is constructed from 6/4 with a triangular shaped tope tube, 10 sided seat tube and four sided down tube.   Also included are the new engraved bottom bracket , disc brake adaptable drop outs (w/ "L" cut out), stainless steel seat collar and new seat stay design.  The Owl Hollow continues on basically unchanged but does included the new drop outs, seat collar and bottom bracket shell.  The Toccoa (North Georgia river) is also new for 200 and uses similar shaped tubing to the Tanasi but using 3/2.5 titanium instead of 6/4.  Triangular shaped top tube, 10 sided down tube and four sided down tube.  The frame uses the disc adaptable drop outs (w/o the cut out) and a standard bottom bracket and seat collar.  The Pisgah (National Forest near Asheville, NC) becomes the entry level bike constructed of 3/2.5 with a four sided down tube and disc brake adaptable drop out.

Bars (Ti and aluminum) continue as do the Ahead stems and seat post.  The seat post changes to the Control Tech style head.

The big news is the addition of Rock Shox SID shocks to the Tsali and Unicoi.  This gave much more control to the suspension than the previous coil spring.  Other than that addition, the bikes are both nearly identical to the 2000 models.

The Tanasi, Toccoa and Pisgah all carry over as well.  The Owl Hollow is gone and the Kitsuma (trail near Black Mountain, NC) is the new model.  The new model is more of an extreme use bike and features a curved top tube for more clearance, disc brake only, top tube/down tube side gussets and a new "big hit" geometry.   The 10 sided seat tube is found on the Tanasi, Toccoa and Kitsuma.

Parts carry over unchanged from 2000.

The Unicoi is the sole soft tail model as the the Tsai disappears from the line.

All models feature a new oversized integrated head tubes and new drop outs.  The Pisgah continues as the entry level model while the Tanasi anchors the high end.  The Lookout Mtn. is the new mid-priced offering.  The Lookout Mtn. is a 3/2.5 frame but is disc specific with a triangular top tube and 4 sided down tube.

Parts, once again, carry over from the previous year.