Gecko Cycles was founded in 1983 in Santa Barbara, Ca. by Ken Beach ("KB"). It all began when I started racing downhill in 1979. I applied my skills as a fabricator to the bicycle industry, designing, building and repairing frames and components. I designed several products, including a long throw thumb shifter for Shimano, a chain tensioner for the Descender downhill bikes and tandems, double-ovalized stem, a one-piece bar stem combo, and a long cage front and rear derailleur. In 1981, I sold most everything I owned and gave up my drywall company of 30 employees to live on my bike. I toured all over the west coast, the Rockies, and Hawaii. While living on my bike, I had more ideas of bike geometries and bike components. Still racing MTB's I decided to settle down in Santa Barbara in 1983 and start building my innovations. The models I built at that time were the Slickrock (light, fillet brazed and beautifully finished fillets), Survival ( a world tour bike ), Camuesa (Mtn. Tandem ), and the Lightfoot (beefy road bike). All of these early bikes were meticulously filed and finished. Also in the early 1980s, I worked for Chris King of King Headsets and Richard Cunningham of Mantis Bicycle Co. I learned a tremendous amount about machining, and frame building during that time. In 1987 I rented a shop in Santa Barbara and took the bicycle business to another level. At my shop I built over 250 frames and painted well over 500. I developed several bikes, 2 of which were the Y-File It, and the Genesis. The Genesis was in Mountain Bike Action's most innovative bike of the year issues in both 1989 and 1991. The Genesis and Y-File were both fillet brazed, but not filed. I still produced the highly finished models, but most all were of the unfinished joint variety. I did have a go at hiring a few people, but the quality was too hard to maintain. No one lasted more than a week or two at the most. To this day I still do all the work my self and in house. The highest quality is assured when you get a product from Gecko Cycles. In the early 1990s my priorities changed from racing and full time bicycle production. I got married in '90 and we had our first boy (Jason) in '91. In '92 I became Mr. Mom and bike production all but stopped. While raising my son Jason to be a full blown toddler, I produced only a few bikes. In 1993 we moved to Boulder, Colorado and I started working for Zinn Cycles in Boulder early in '95. I moved all my machines and equipment to his shop and I produced a few Geckos out of his shop. After about a year he scaled back. I rented another space in Boulder and I took over his whole production, replacing all 6 employees in the shop. This kept me quite busy building lots of Zinn bikes but again only producing a few Geckos until early 2000. In May of 2000, I stopped building Zinn's bikes. I found it to hard to produce Zinn's, take care of our second boy (Victor), build Geckos, and study to become a computer network engineer. I am now producing Geckos, building and repairing computers, setting up networks, building websites and hosting websites from my house. I am also making some parts for my latest toy, the Suzuki Samurai. 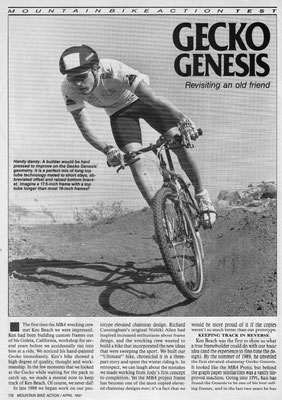 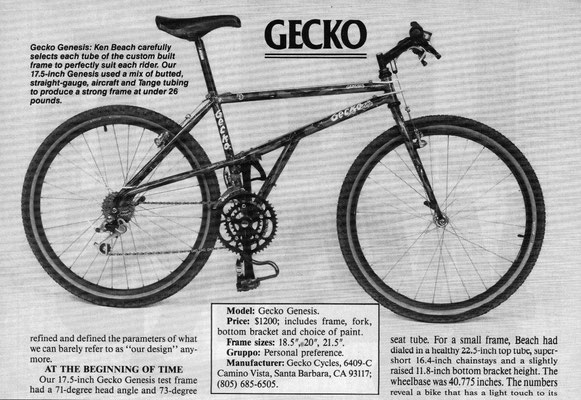