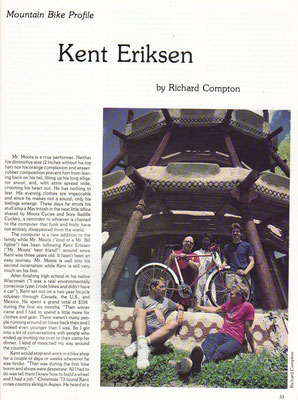 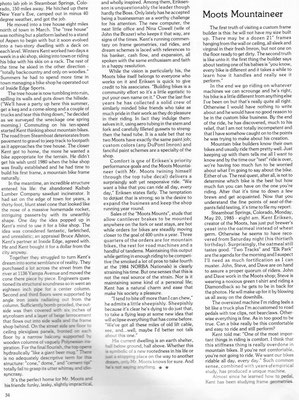 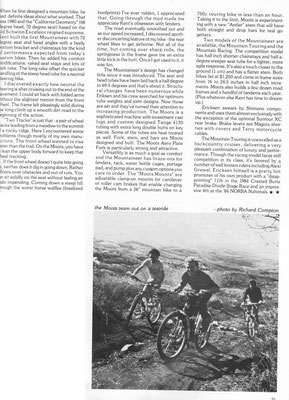 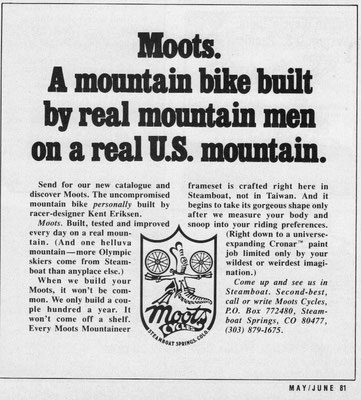 Kent is a native of West Bend, Wisconsin. In 1975, he founded a bike shop in Steamboat Springs, Colorado. His specialty was building touring bikes for trails and dirt roads. In 1978, Kent began building his own custom frames for balloon tires with multiple gears and cantilever brakes. Kents invention of the Moots Mount, an adjustable cantilever brake stud patented in 1980 led to the development of the Moots Mountaineer bicycle. This bike went on to win the first NORBA Off-Road National Championships in Solvang, Califonia. In 1984, Kent invented what we now call bar-ends; those nifty, multi-position gadgets found on so many mountain bikers handlebars today.

In 1986, Kents futuristic thinking guided him to develop rear suspension for his bikes called YBB (Why Be Beat). So simple in its design and effective that in 1995 Hall of Famer, Tom Ritchey, started incorporating Kents design and parts on his top-of-the-line XC bikes.

Kents source of inspiration for his innovations came from years of mountain bike racing. In 1984, he finished 5th in the Nationals at Boulder, Colorado. In the past ten years, Kent has been a top-ten finisher in the Colorado Off-Road Point Series, finishing second in 1994.