The prototype of the Carbon Cross frame was shown in the Spring of 1988.  This frame was similar to the later bikes except it was lacking the extra bracing to stiffen the bottom bracket.  According to reviews at the time, Trimble made a prototype out of solid Douglas Fir wrapped in fiberglass.  The first frames were constructed from a 30% carbon fiber, 70% fiberglass composite. A second article states that the first bikes were made from E-glass, a fiberglass designed for electrical applications.  The thinnest parts used 6 plies and the as many as 24 layers for the higher stressed areas of the frame. The frame is a similar style to the cross frames from the 1880's.   This made the bike a little too flexy and made front derailleur mounting problematic.  The frame price is listed at $1,200 and sold by Trimble Products Company in Berryville Arkansas.

The article is from February 1988 and features a "cross frame"

The article is another of the Trimble brothers (James) who experimented with road bike designs.

The bar is a one piece carbon bar with a short steel insert in the lower (inserted) section of the stem. Cost was listed at $125. Roo Bar article can be seen above.The design was worked on during the year and changed to the Inverted 4 design. 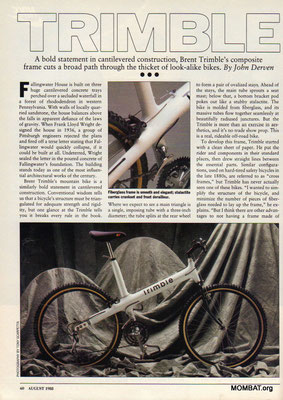 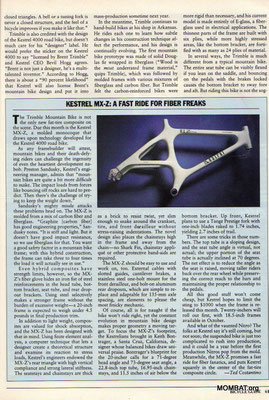 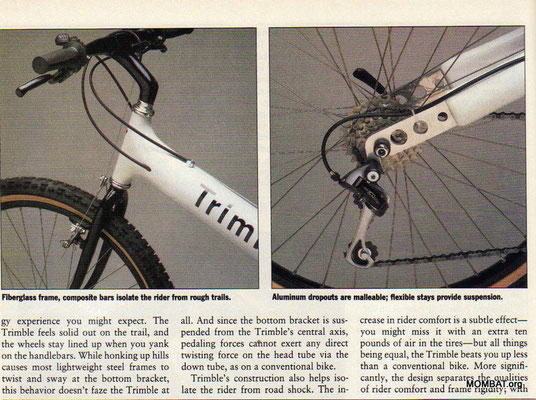 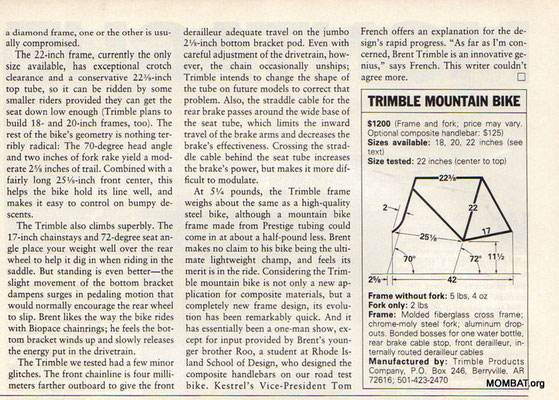 The new Inverse 4 frames start showing up with the reinforced bottom bracket area and more conventional from derailleur mounting. There were rumored to be approximately 500 of the Inverse 4 frames sold including a few team issue bikes with a fade paint job and tiger stripes.

1991 Several variations may have been experimented with including "seat less" frames for trials use or possible fitment of the Allsop suspension beam. May have begin experimenting with external cable routing. 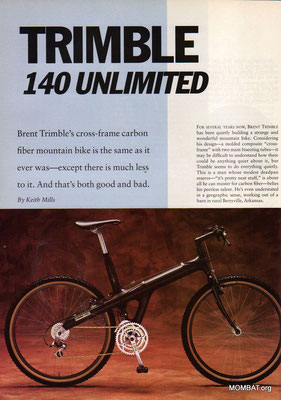 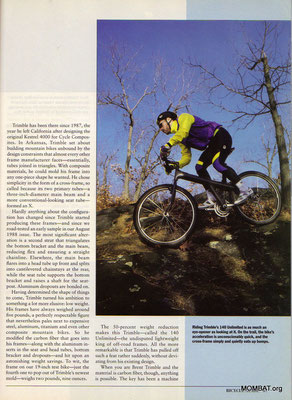 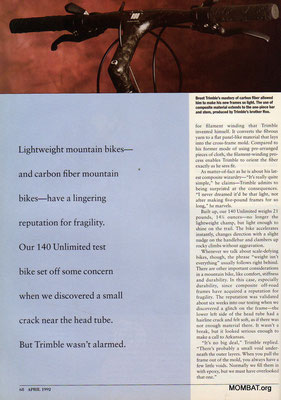 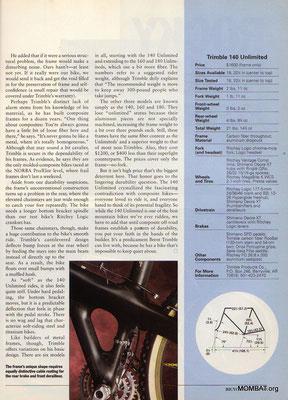 The rear dropout is changed from the 3 hole design to a single hole elevated design. This raised drop out design accommodated the new longer suspension forks and still allowed for use of the existing frame mold. The new design also featured a new front derailleur pulley mounted to the bottom bracket, external cable routing and a cantilever brake mounting adaptor. There were three models, the 140, 160 and 180 and each was available in a regular model or Unlimited model. The number referred to the maximum rider weight while the Unlimited model had specially machined aluminum pieces to save weight over the regular frames. The frame price was still listed at $1,200 for the regular models and an additional $400 for the Unlimited frame. The old Trimble frames were listed at 5 pounds while the new Unlimited 140 model was two pounds and nine ounces. Unfortunately, the weight recommendations were often ignored which gave the bikes a reputation for breaking.

A full suspension bike was shown by Roo Trimble and Mike Augspurger (founding member of Merlin) that consisted of the front half of a Inverse 4 bike mated to a rear swing arm and "Gizbag" shock. The Gizbag consisted of a folded up inner tube sewn into a heavy duty bag made of nylon webbing. Don't know if it ever got further than the prototype stage but it sure looked interesting . June 1993 Bicycle Guide magazine review of the Gizbag suspension frame based on a Trimble frame and designed by One-Off: 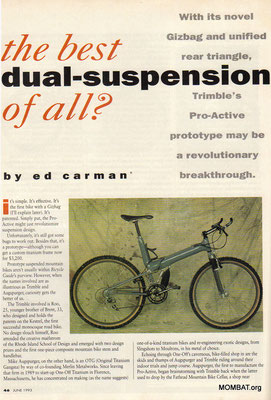 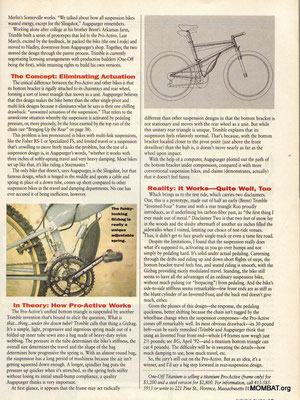 On the 10th anniversary of the original design, Dean Ultimate Bicycles licensed the design, borrowed the mold and planned to make 1500 frames. Estimates range from 15 to 80 frames that were ultimately produced by Dean.

Brent is currently working on a third generation hard tail design as well as a rear suspension design. I'll post more details as they become available. Should be exciting!!