The second product is a bicycle frame under the Talon name. Talon This is the bike that Alan took around to bikes shops, in the spring of 1989, to show them his project. He met Chris Cocalis at one of these shops and they formed a loose partnership. Alan taught Chris frame building techniques while Chris helped with the bike builds. Kimel Graham, whom Alan met at an REI store, was also involved with the bike design and building. Notice of the first bike made its way into the June 1989 Mountain Bike Action magazine.

Talon Elite in Mountain Bike Action magazine, November 1989. This bike was the first "production" bike after the experimental frame. It was ridden by Alan for several months and then featured in the MBA article about elevated chain stay bikes. Middle photo is Chris Cocalis test riding the MBA bike. Photo on the right is of the MBA bike at an ORBA Elite event:

Bikes #4 and #5 were build for bike shops, in the late summer of 1989, and used the shop name as the serial number. #4 was built for the BIKE SHACK and #5 for the BIKE BEAT. Approximately 4 of these frame were painted and airbrushed by Dino Segovis while the later frames were powder coated and then splatter painted by Alan. The #4 Talon Slayer that now resides at the MOMBAT. Two small diameter mid tubes which continue to the drop outs, single small diameter top tube bends and fill in between the twin mid tubes, braces under the cantilever brake mounts to the mid tubes, single non-drive mid-tube to bottom bracket brace.

#10 and #11 featured a name change to Ultra which reflected the TIG welded front triangles. #10 started life as a blue/orange/yellow frame and was later painted yellow. Both iterations are pictured below. 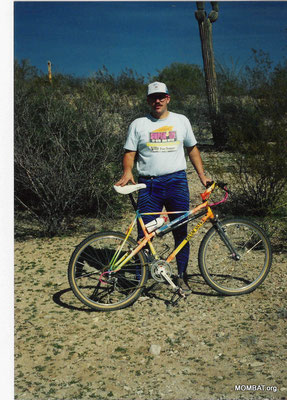 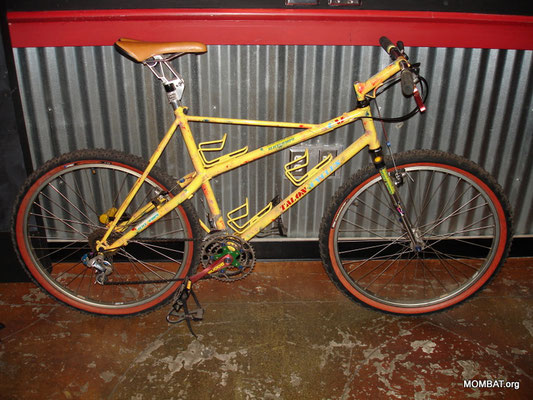 #14, circa July of 1990, was the Nomad which featured a TIG welded front triangle. 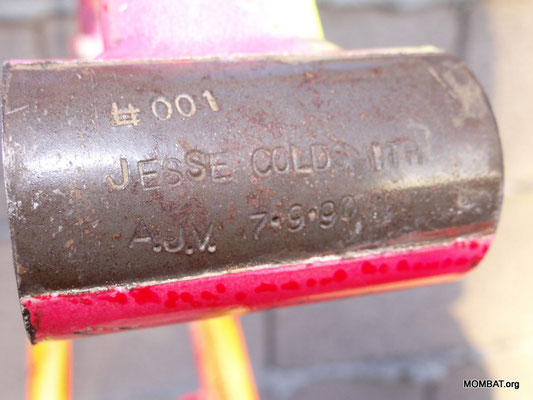 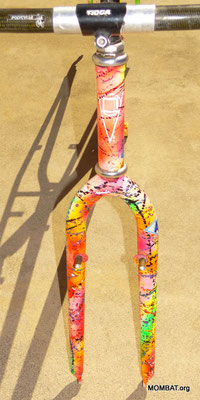 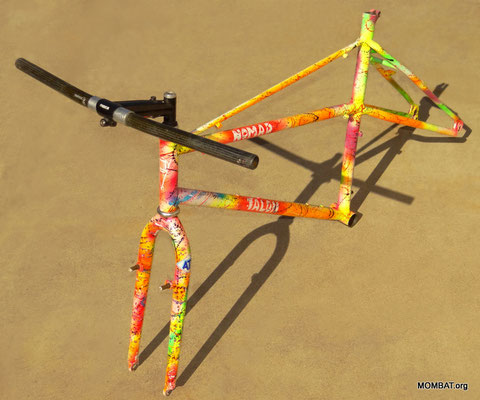 Talon Road Beast #15 build for Rita Sargent circa August 1990. One of one:

Alans love of off-road riding started around 1967, when he built his first off-road bike from parts he scrounged from the local dump where he lived in Fort Walton Beach, Florida at the age of 9. Shortly after his first one, he started working with junk geared frames with larger tires to accommodate his growth. Alan and his friends rode the semi-jungle trails in and around the area he lived until he moved to El Paso, Texas in 1971. After that he rode the desert trails near railroad tracks and in some areas east of El Paso. He always had a bike built from discarded parts with mismatched wheel sizes, and was constantly fixing flats from goathead thorns. Alan estimates he had put together 10 pre-klunkers used for multipurpose off-roading and as choppers during his younger years and beyond high school.

While living in Juneau, Alaska in 1984, Alan borrowed a friends Schwinn Sidewinder to run some errands and had a hard time going home after riding on some small trails instead of the street. This kept happening, though Alan had a car. At the end of 1984, Alan moved to Phoenix and married the following year. He made the mistake of going into a bike shop shortly after his wedding and saw the new Diamond Back Apex. He took a loan out to buy his first production bicycle and hasnt looked back.

Shortly after that Alan had a desire to do more than just ride off-road in the beautiful Arizona desert. He wanted to build something for Mountain Bikes and was inspired to start with a trailer for hauling camping gear. This design encompassed a triangular aerodynamic frame that held a large bag with 2 compartments with the capacity of 3 large backpacks. After building a few of these he developed a trailer as wide as normal off-road handle bars that consisted of a frame for strapping a cyclists gear and it used Phil Wood wheel chair hubs. This allowed trailer to go anywhere the cyclist could steer it. One of these trailers was used by a young couple named Slater to set the US records for riding around the world on a tandem at the time.

While introducing his trailers at Interbike in 1988 Alan had the wonderful opportunity to become a Charter Member of the Mountain Bike Hall of Fame and has supported it ever since.

When he found that NORBA was a local organization he decided to see if he could help with organizing local events with a his friend Roy Edwards who started ORBA (Off Road Bicyclist of Arizona), the precursor to MBAA (Mountain Bicycle Association of Arizona). After working with ORBA in race planning and trail building, Alan took on the job of Director of Operations at NORBA for part of 1989. He helped race organizers, dealt with member concerns and backed Max Jones within NORBA in starting a new racers group that benefited members and not the organization. The highlight of this experience was participating in the fun race at the NORBA Nationals in Durango that required 2 crossings of the freezing Animas River. The highlight was not finishing last!

Following that Alan felt it was time to build a frame of his own design. Following a trend for more clearance from the ground and elevated chain stays, Alan designed the first of a series of frames. This design added additional bottom bracket height for clearing the large rocks and obstacles found on the trails in Arizona and elevated chain stays that eliminated chain suck on the abusive trails in the desert. This design also incorporated a small amount of flex obtained by using chain stays that ran from the head tube to the rear drop out, that gave it a slightly smoother ride over very rocky trails.

These Off-Road frames started out as Talons and his company was Sun Eagle Bicycle Works. After a short period of time the companies name changed to Talon Cycles. Alan Built a few variations of his elevated chain stay frames with names like the Elite (tested by Mountain Bike Action), the Ultra and the Nomad. He had the pleasure of teaching Chris Cocalis a few things about frame building before Chris bought his own Talon. Chris went on to establish Titus a couple of years later.

Along with building Mountain Bikes, Alan built a unique road bike for Rita Sargent called the Road Beast with its Klingon Bird of Prey styled forks. His most challenging project was building a very special frame for Micheal Secrest, who set a World record of 1256 miles in 24 hours. This frame had an elevated chain stay on the right side to accommodate a 92 tooth chain ring specially made by Bullseye to attain the speed needed for the World Record.

In 1994 Alan moved away from frame building and uses his Aerospace coating experience to manufacture Talon Cycle Slick Whips, Teflon coated cables. They became so popular that they were standard equipment on Grip Shift components. Cannondale among others used them on their off-road team bikes and they were also used by Cannondale/Saeco in the Tour de France. Alan and Talon Cycles manufactured these for about 4 years, until foreign companies became too competitive for his small company which he operated from his home and back yard as a true pioneer. He eventually closed Talon Cycles when it was still profitable and decided to spend more time with his family, work on his art and enjoy mountain biking and other sports without all of the work.

Alan continues to ride and support mountain biking, rider safety and helps young riders when he can. Alan now has grandchildren to whom he is passing along his love of cycling to as they grow to fast. He happily supports the Mountain Bike Hall of Fame and mombatbicycles.com with their wonderful histories of Mountain Biking.