The company was founded in 1940 as the Ross Galvanizing Works. It was located in Brooklyn, NY near the Brooklyn Nay Yards. During WWII the company had extensive contracts with the U.S. Government to galvanize the bottom of ships. When the war ended, at the suggestion of Sherwood Ross, the company switched to the manufacturing of wheeled goods including bicycles, tricycles, wheel chairs, lawn mowers and roller skates.

The company moved its manufacturing plant to Rockaway Beach in Queens, NY in the 1950s and by the late 50's solely manufactured bikes and trikes and was the 3rd largest domestic producer of bicycles after Schwinn and Huffy. The company moved again in the early 70's to a new facility in Allentown, Pennsylvania. During the two oil crises of the 1970s (1973 & 1979) the company worked around the clock in three shifts and turned out over 1 million bicycles in each of those years.

Upon Albert Ross' retirement in 1969 the ownership of the company was turned over in equal shares to Albert's son Sherwood B. Ross and daughter Teddy. In 1980, Sherwood B. Ross bought out his sister and remained the sole owner until the company went bankrupt in 1989. The company was unable to compete with imports from the Far East made with very cheap labor. The company tried to stay afloat by shifting its bicycle manufacturing to leased factories in Taiwan and use the Allentown facility to fulfill government contracts that it had successfully bid on.

The name ROSS was purchased out of Bankruptcy Court by Rand Cycle, Farmingdale, NY. Sherwood B. Ross worked for Rand for 5 years as a consultant as part of the name deal. Rand never sunk enough money into marketing the ROSS name and although they still own it, they are not actively pursuing ROSS sales.

In 2007, Sherwood's son Randy Ross introduced the stepper bike, an elliptical, stationary, and road bike all in one designed by renown bicycle inventor Gary Silva. 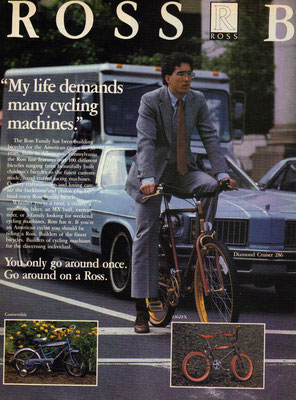 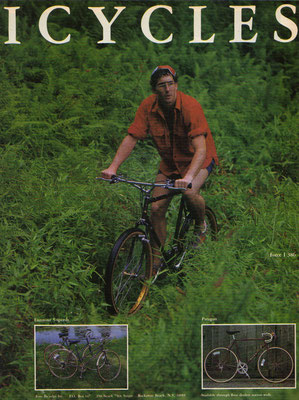 In the late 1970s and through the mid-1980's, Ross had models that directly competed with the Schwinn Side Winder called the Ross Diamond Cruiser. Ross introduced their first production MTB, the Force 1, during the first Interbike Show in October 1982 the bikes name was later changed to the Mt. Hood due to a trademark conflict. In early 1982 Ross Signature (hand made bike department) was making custom Mountain bikes. Jim Redcay was the builder (Tom Kellogg was working on Road Bikes). Jim was also involved in the Force 1 frame development. This was the first bike Ross had built in Allentown with cantilever brakes. 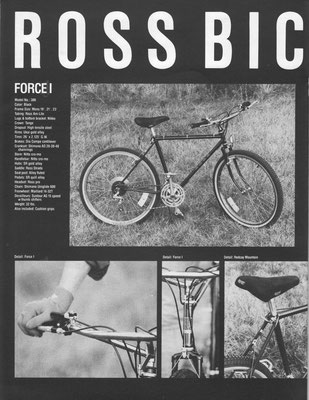 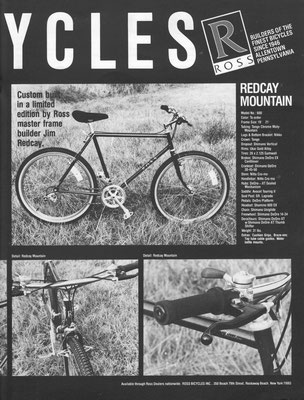 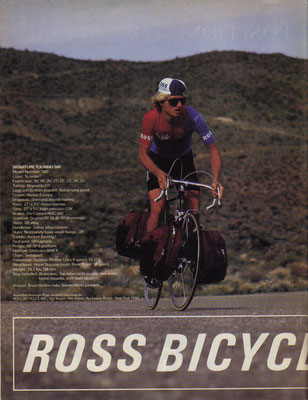 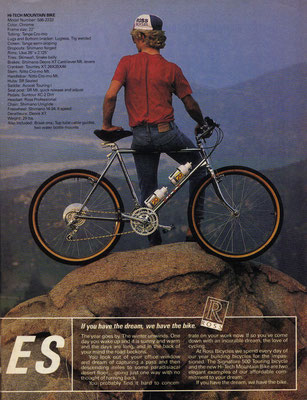 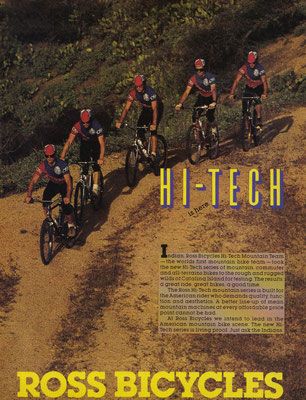 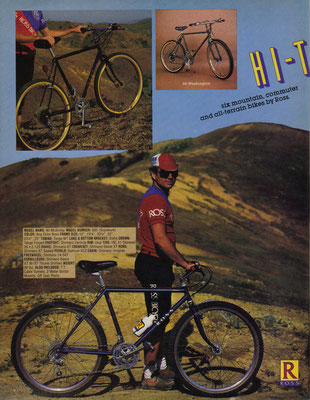 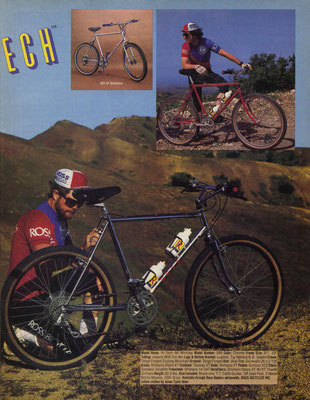 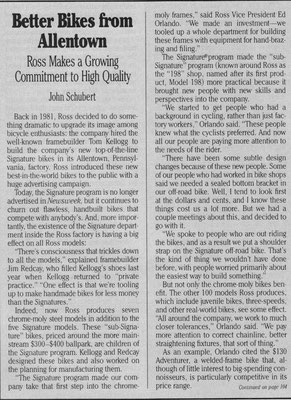 In 1983, John Kirkpatrick coordinated the creation of the Ross Indians. They were the first professional factory sponsored mountain bike race team, complete with paid riders, uniforms and the semblance of a support staff. 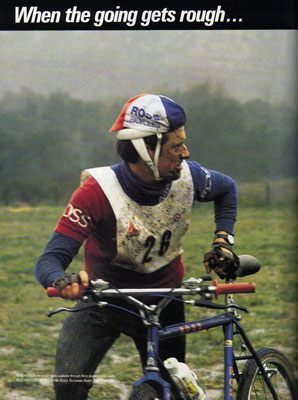 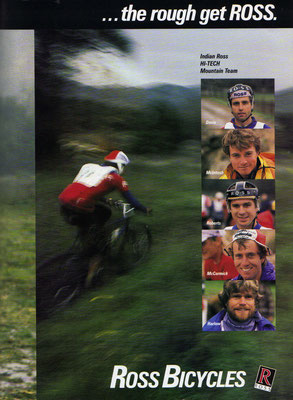 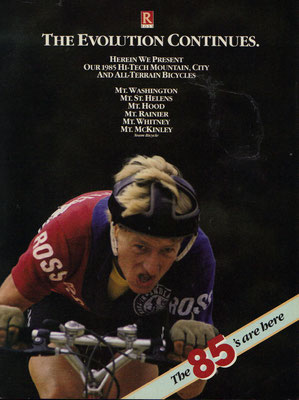 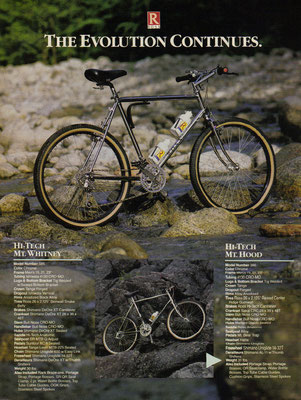 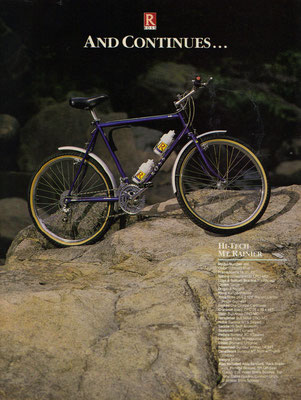 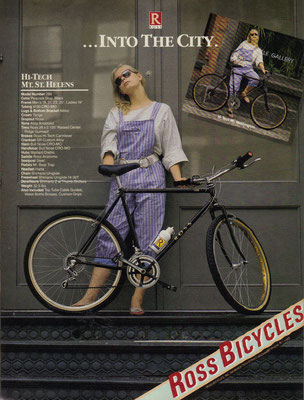 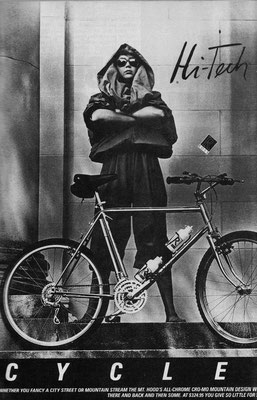 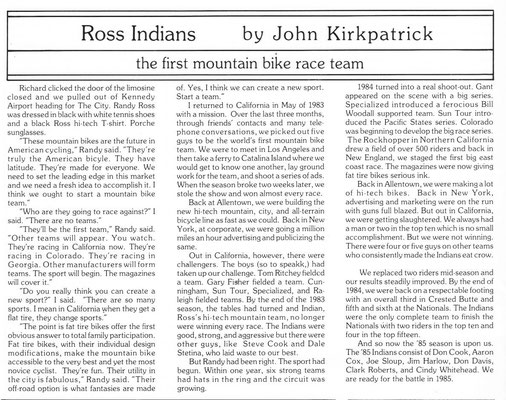 Bike reviews from the June 1985 Mountain Biking for the Adventure magazine including the Ross Mt. Whitney. 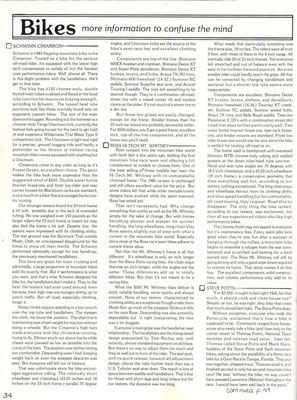 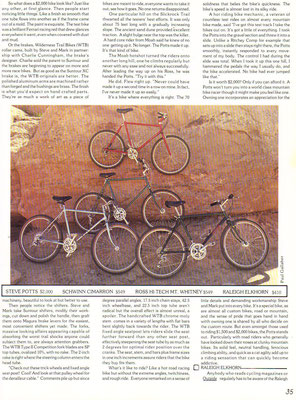 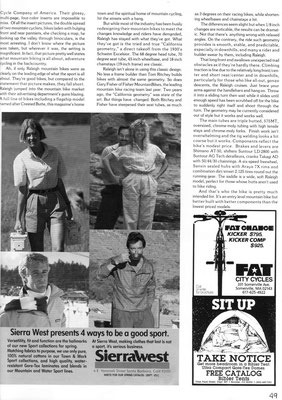 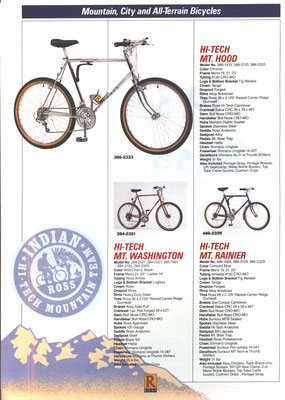 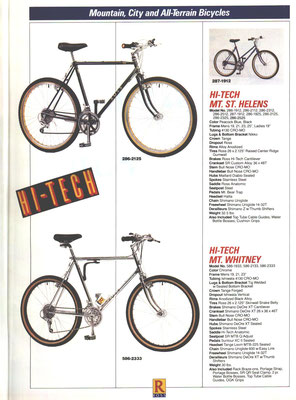 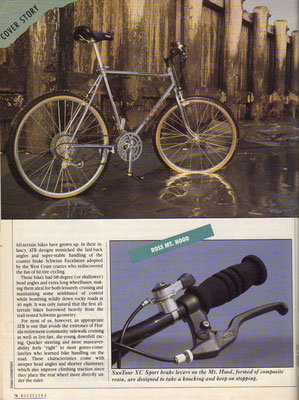